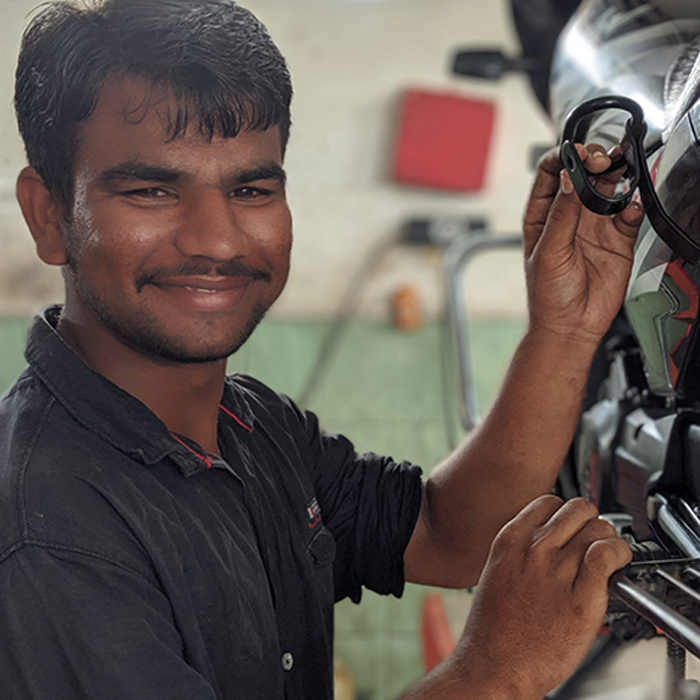 Hassan an 18 year old beneficiary of our Community Development Programme in Bhuj currently works as a full time employee with Hero Motors. He earns a sizeable amount of monthly salary and is able to meet the needs of his family. Few years ago things were not rosy for Hassan and his family, their situation was completely the opposite of their present socio-economic condition. At the age of 15, due to failing economic situation of his parents Hassan had to quit school. To fulfill the basic needs of his family, he started working as a daily wage laborer at a construction site. Things changed for Hassan completely as he could not do anything for himself and his family. Soon when SOS India’s field team identified this family of five and signed them for our pioneering Family Strengthening Programme, he once again started thinking of building a bright future for himself. With the combined efforts of Hassan and SOS India, he managed to get his first job at Hero Moto Corps dealership in Bhuj. He is working very hard at his job and according to his line manager, “Hassan is god sent as within a very short time of his training he has become the best technician we ever had”. SOS India wishes Hassan all the best for his coming future endeavors. 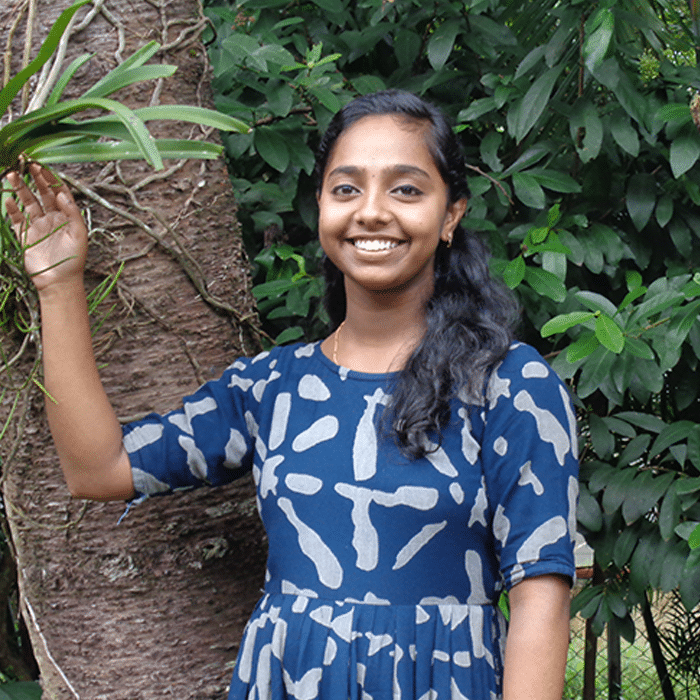 “It was a Wednesday, I was taking tuition classes for my younger siblings and suddenly Daliya Aunty called me to ask if I was interested in taking part in a reality show. The top Malayalam TV channel of Kerala was organizing a Quiz Game Show Udan Panam on the occasion of Onam. Hearing about this opportunity I got really excited and my first reaction was ‘WOW yes’! The joy for Angle right from applying for the quiz by recording a video to winning cash price of INR 75,000 has been a very exciting and joyful time period. She enjoyed being a part of this quiz competition and thanks SOS India for giving her this opportunity to be on TV and make her entire SOS family proud especially her SOS mother. 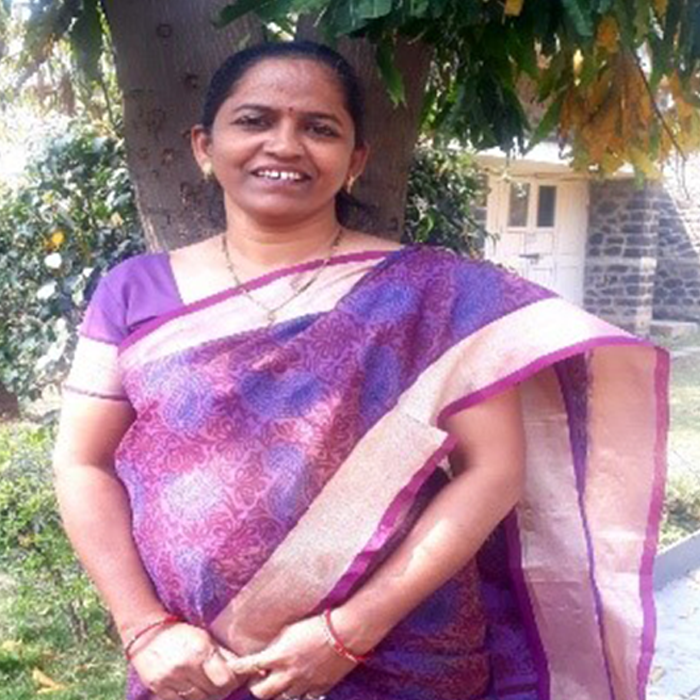 Strong people stand for themselves, but the strongest people always stand for others. The Founder and President of “Nirmal Seva Old Age Home” in Pune, Ms. Nalini Dhende is a 47 year old woman who has been working selflessly in the field of social work since the last 18 years. She has touched many lives; of underprivileged children, adolescent girls, women and now the old age women. This lady has put ideas into practice and achieved her goals, with the help of her impactful and progressive approach towards humanity. Nalini has devoted herself to the service of old age women, who are deprived and neglected by their family members. Currently, she is taking care of around 20-old-age women. They are all destitute women and need support. She is running this Old Age Home for homeless women by contributing her personal earnings and putting herself in 24x7 working hours. Being a professional nurse is helping her a lot and this is also one of the reasons that she is able to serve these women with love and proper care. 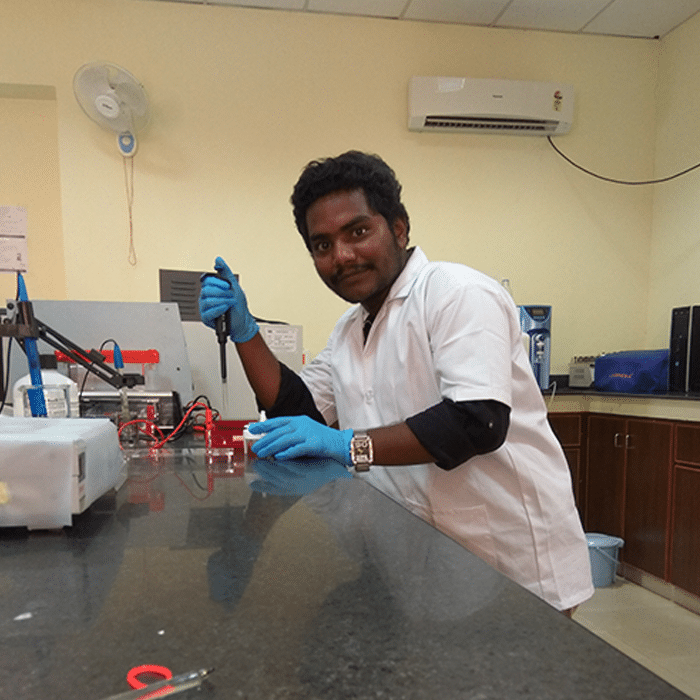 PHD scholar, University gold medalist and 2019 Pratibha Awardee - Pothabathula Seshu Vardhan is the real hero for the entire family of SOS Children’s Villages of India. Seshu is among those who made everyone proud by showcasing exceptional work and great accomplishment in the fields Bio Technology & Life Sciences. Seshu is a hero for several reasons; he proved to be courageous, demonstrated his intelligence, and he lives to tell his story along with improving the lives of people around the world. Seshu’s madness for Bio Technology & Life Sciences led him completing his graduation in B. Tech. (Biotechnology) in 2013, followed by several years of work. He worked as a Robotics Trainer at ROBOCLUB in Vijayawada, with basic responsibilities as a training student in making BILOIDS, LEGO robotics and their programming. Later he worked for 2 more years as an Executive Engineer in networking and telecommunication industry along with saving money for his higher education and livelihood. Finally, his hard work and destiny brought him back to Jawaharlal Nehru Technological University for pursuing Masters in his favourite subject, Biotechnology. 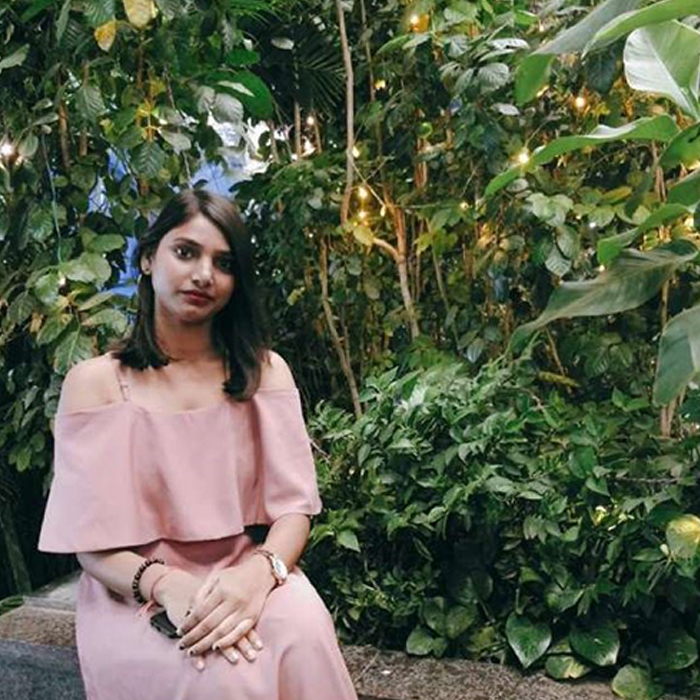 In 2008, 10 year old Nirali entered the gates of SOS Children’s Village Greenfields and was placed under the care of SOS Mother, Savita Mohanty. At the time of home coming, Nirali was a vulnerable and an emotionally unstable child. She remained sad throughout the day and felt insecure most of the time due to her traumatic past experiences. With dedicated efforts of her SOS mother and all other village members, Nirali started to gain confidence and began to come out of her shell. “The love and affection I received from my mother and siblings was extremely heart touching. Today whatever I am is because of their constant love and support. My SOS family means everything to me” shares Nirali. Initially, Nirali was placed in the village preparatory school for building her academic foundation. But, with her constant hard work and dedication, she sought admission in Hermann Gmeiner School, Faridabad. Upon, completing her 10th Standard she opted for Humanities stream as her ambition for the future was to do social service and become a lawyer. For Nirali, the turning point in her life came when she got selected for the Earth Watch Student Expedition Programme in the Himalayas (Kullu) for 10 days in 2016. She was one of eight students who got selected for the expedition under the India-UK exchange programme by Earth Watch Institute India, which is situated in Gurgaon. The Earth Watch Institute in India is a premier learning, educational and a skill development institution in the fields of Environment, Sustainable Agriculture and Technology.

It gives us immense pleasure and a sense of pride to see children and youth carve a niche for themselves. Many of our supported youth are now settled via job and doing well in their life. To be able to make a small contribution towards prosperity and bright future of this country is heartening for us.

I have now been associated with the SOS organisation for over 20 years. I find SOS as an organization set up to do real good for the society. I find their work remarkably well done and their work is an inspiration to how charitable organisations should work. Thanks for everything you do for our kids. All the very best.

First of all, I am happy to know that all children & youth are safe under SOS Villages during these challenging days! It’s really a pleasure to me, sharing my experience about SOS Village. I have been an active member of SOS Village since 2011 & till date I am very satisfied with Village activities in terms of Donation clarity & all levels of communication. People of SOS organisation are always ready to answer or clear my doubts. I will never forget my first day visiting the nearby SOS centre in Salt Lake which made my decision stronger to support a child till he/she completely settled. I am proud to be a part of SOS & my support will continue till my last breath.

Kudos to SOS Children’s Villages team: I have been sponsoring children at the Village for many years now. Currently I have three children. Gives me immense satisfaction to help these unprivileged children in a very small way. Am glad SOS Children’s Village takes their responsibility and help them bloom. My personal experience has been great, I have access to the donor’s site where I get to see the progress my children make over a period. I also know that the money I donate is actually spent on the children. My son spent 45 days as a volunteer at your Bangalore site. He gave me great review of how the team cares for the children, and how he spent some time every day during this period playing with them. I will definitely continue to be a sponsor as long as I can. You guys are doing a wonderful job... please keep it up!