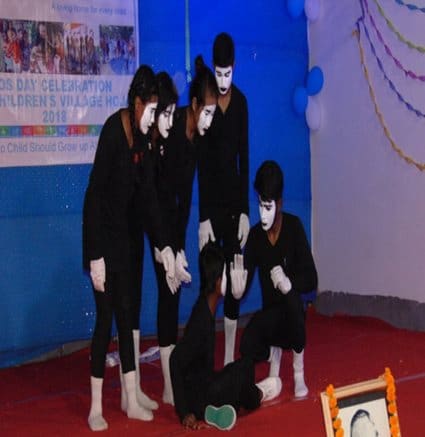 Commemorated on June 23rd every year, SOS Day marks the birth anniversary of Dr. Hermann Gmeiner, founding father of SOS Children’s Villages. To celebrate the joyous day, a cultural programme is organised in all 32 Children’s Villages across India, wherein children and co-workers participate together and indulge in activities like singing and dancing. Below given are some of the highlights from events that took place in our Children’s Villages this year:

In Shillong, the celebration was graced by the presence of Chief Guest Mr. Conrad Sangma, Honorable Chief Minister of Meghalaya and Guest of Honour Mr. George Lyngdoh, along with other dignitaries.

The celebration began with garlanding the bust of Dr. Hermann Gmeiner along with the plantation of saplings within the Village campus. A tour of the Village was given to all dignitaries, where they spent time with mothers and children in their Family Homes. Following this was the cultural programme that began with the addressing note of Mr. M.K Pradhan, Village In-charge.  Additionally, cultural performances by children and youth were enjoyed throughout and were much appreciated.

On arrival, Ms. Chakraborty addressed everyone present including the children, Village Director, Mothers and other Co-workers and announced the festival open. To partake in our happiness, 12 donors visited SOS CV Kolkata out of which, six carried out a plantation drive as part of the SOS Day celebration. The welcome ceremony was followed by a song performance by the FSP Community, a dance performance by our children from the Village and many other fun-filled activities. The programme was concluded with a prize distribution for children who had shown exemplary performance in their secondary and higher secondary school.

In Greenfields, the event was announced open by Chief Guest Mr. H.S. Mallik, Chairperson, Child Welfare Committee (CWC). On arrival, the guests were taken on a Village tour, where they also spent some time with children and mothers in Family Homes. We were also delighted by the presence of six of our donors, who visited SOS CV Greenfields and carried out a plantation drive for the first time as part of the SOS Day celebration. They even interacted with children and counselled them for their career.

The formal programme began at 5:00 pm with garlanding the bust of Dr. Hermann Gmeiner, followed by lighting of the lamp. The Village Director then addressed the audience and called on stage the little superstars, who took the happiness and excitement of everyone present to a whole other level! Additionally, a dance performance was also given by SOS Mothers and guests artists from Rhythm Sangeet Mahavidyalaya, who concluded the programme with success.

The programme began at 5:30 pm with a guided tour of the Children’s Village and Family Homes led by the Village Director. This was followed by the lighting of lamp and a floral tribute being paid to the statue of Dr. Hermann Gmeiner. A cultural programme was organised by children and youth, where performances like mime show, dance and singing were witnessed and enjoyed thoroughly.

In Rourkela, not only did the enthusiasm of children reflect in decorating Family Homes, special dishes were also prepared by SOS Mothers for their family members. A cultural programme was organised for the occasion during the evening, wherein the presence of Chief Guest Mr. Devi Prasad Das, Additional Superintendent of Police, Zone 1, Rourkela was witnessed. Further, Guests of Honour for the evening included names like Mr. M.B.K Rao, AGM NSPCL, Mr. Sunil Kayal, Ex-President Chamber of Commerce, Rourkela and Dr. Sanatan Pradhan, Reader, H.K. Ray College, Rourkela.

The day began with garlanding the bust of Dr. Hermann Gmeiner and paying a floral tribute to him. As part of the formal celebration, the SOS Day Greeting message was read aloud by the Village Director following which; children shared stories about their ‘Dadaji’.

The day was thoroughly enjoyed by all!

In Bengaluru, the programme began at 5:00 pm with the prayer song, which was then led by lighting of the lamp. While Mr. Hemanta Kumar Das, Village Director, Bangalore gave the welcome speech, the word of blessing was delivered by Chief Guest Smt. Sowmya Reddy, MLA, Jayanagar Constituency and Guest of Honour Smt. Narmada Anand, Project Director, ICPS, Govt. of Karnataka.

The cultural programme started off with a classical dance performance by Ms. Chethana and Ms. Archana, two of the very talented settled girls from SOS CV Bangalore. The programme ended at 7:30 pm and was concluded by a thanks giving speech by Mr. Vishwanath Reddy, Assistant Village Director, SOS CV Bangalore.

Morever, eight of our donors visited SOS CV Benagluru to be part of our SOS Day celebrations. They were also given hand made ‘Thank you’ cards for taking out the time and visiting the Village.

While the cultural programme included several group dance and singing performances, the highlight of the evening was honoring Mother ASL Laxmi and Mother Manju Rawat, who are going to retire in 2018. A prize distribution ceremony was conducted at the end of the programme, wherein our children were recognised for their exemplary performance in both academics and sports.

The programme started with garlanding the bust of Dr. Hermann Gmeiner, which was then followed by the Village tour for all guests. Additionally, a tree plantation activity was undertaken by ten of our donors who visited SOS CV Pune to join us in our celebrations. The formal programme began with a traditional welcome, wherein guests were invited on stage along with the Village Director and Zonal Director to address the audience, which was then followed by remaining planned activities.

In Cochin, the programme was inaugurated by Mr. Paul Mundadan, Chairman, Federal Institute of Science and Technology and Mr. Paul Mundadan, an eminent motivational speaker. They addressed the audience with a short speech, which was followed by a talk session on Child Rights and Protection by K. B Zaina, District Child Protection Officer, Ernakulam District. While the programme definitely had fabulous cultural performances of our children and youth, an award ceremony was also organised to reward children from FBC and FSP for their outstanding performance in academics and extra-curricular activities.

In addition, a street Play was also staged by our children after having been trained by the Moozhikkulam Sala Drama Division to pay homage to our father Dr. Hermann Gmeiner.

Additionally, 70 donors visited SOS CV Cochin and carried out a plantation drive as part of the SOS Day celebration. A drawing competition was also organised for children, where they were judged for their artwork by donors.