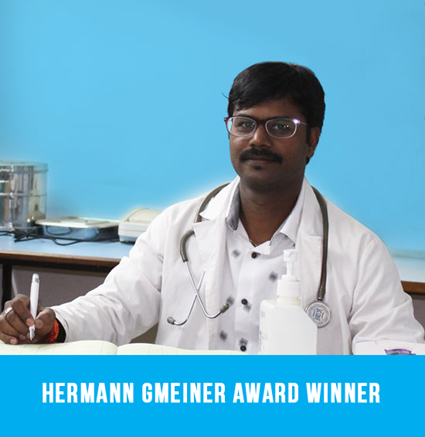 Dr. Muruga Sirigere, a physician from India, has been conferred with the prestigious Hermann Gmeiner Award for 2018.

Dr. Muruga Sirigere, a physician from India, along with Ms. Maria Anggelina, an activist against human trafficking from Indonesia, have been conferred with the prestigious Hermann Gmeiner Award for 2018.

The bi-annual Award honours inspiring women and men who were cared for in SOS Children’s Villages and have gone on to become role models in their communities. Muruga Anggelina was chosen from eight finalists selected from 71 nominees from 30 countries.

SOS Children’s Villages across the globe have witnessed many inspiring stories of transformations, children who have been a part of an SOS programme during their childhood and have gone on to become inspiring adults. Dr. Muruga also inspires everyone in his community with his dedication and commitment to the not so privileged. Born to a labourer and an agarbatti-maker and having lost his father very early in life, Muruga was raised in SOS Children’s Village Bengaluru. Today he is a 33-year-old medical practitioner, with qualifications from India and abroad. He has been proactive in reaching out to children with special needs and challenges like the hearing and speech impaired and those with cerebral palsy and down syndrome. He offers free medical aid and services to those. He has also been instrumental in educating many dropouts, so that they could pursue their dreams.

“I feel very humbled and honoured to be one of the winners of this prestigious award,” said Dr Sirigere. I would like to wholeheartedly thank everyone who is responsible for my achievements, from the time I joined this noble organisation.”

Further, he dedicated the award to SOS Families around the world and to Dr. Hermann Gmeiner for “giving me an opportunity to chase my dreams and achieve them.”

“It is a matter of great pride for all of us at SOS Children’s Villages of India! Muruga had left his past behind when he came to us and made the most of the opportunities made available to him. He overpowered his circumstances with his will to learn and serve. He was exceptional in all his pursuits, while growing up in the Bengaluru Village. And today, he believes in outstanding service to the less privileged, in the true spirit of his profession.”

“Our work impacts the lives of children and young people every day. Many of these young people have not only built successful lives for themselves, but they have also supported their communities and people around them. This year’s winners – Dr Muruga Sirigere and Maria Anggelina – work in the spirit of Hermann Gmeiner by serving their communities and the most vulnerable people in society.”

Muruga became a part of SOS Children’s Village, Bangaluru at the age of five. He has always been outstanding in academics and completed his International Baccalaureate (Class XI and XII equivalent) from Lester B Pearson College of Pacific, Canada on full scholarship. He further completed his MBBS with first class from Mysore Medical College, Karnataka.

The ceremony to confer the Hermann Gmeiner Award 2018 took place at the Hermann Gmeiner Academy in Innsbruck, Austria. It began with an opening note by Mr. Kay Vorwerk, Managing Director of SOS Children’s Villages in Germany. The screening of two short films featuring the lives of Dr. Muruga Sirigere and Maria Anggelina, winners of the Hermann Gmeiner Award 2018, respectively was also done during the ceremony. Both the winners addressed the audience with a speech and were finally felicitated with a certificate and flowers by Mr. Siddharth Kaul, President, SOS Children’s Villages and Mr. Kay Vorwerk, who congratulated them for their exemplary work.