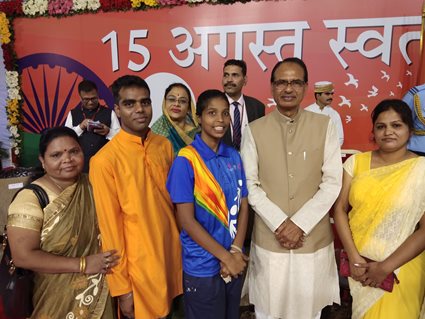 On the occasion of 72nd Independence Day, our children attended a gathering of dignitaries in Madhya Pradesh. Additionally, children from SOS CV Jaipur were also felicitated for outstanding performance in academics and sports.

On the occasion of 72nd Independence Day, a gathering for dignitaries of Madhya Pradesh was organized at the Governor House on August 15th 2018. While the programme was presided by Ms. Anandiben Patel, Honorable Governor of Madhya Pradesh, the event also witnessed the presence of Shri Shivraj Singh Chouhan, Chief Minister of Madhya Pradesh.

As part of the celebration, Kiran and Vijay, two of our children who represented India at the Special Olympic World Winter Games 2017 in Austria and Special Olympic World Summer Games 2015 in Los Angeles, respectively, were invited; this was facilitated by the Department of Social Justice. Not only did the children get the opportunity to attend the programme, they also spent memorable time with Ms. Patel and Mr. Chouhan, sharing with them their achievements and aspirations for the future. While Ms. Anadiben blessed the children and extended her wishes for their bright future, Mr. Shivraj Singh praised their hard work and encouraged them to soar even higher with continued dedication and commitment.

Additionally, both Kiran and Vijay were accompanied by their SOS Mother Geeta Singh, who also enjoyed the programme thoroughly. Ms. Geeta was recently honoured with the Helmut Kutin Award 2017 for her selfless dedication towards supporting and nurturing special children with love and care at SOS India.

Kiran was brought to SOS Children’s Village Latur in November 1996 when she was just a day old. She was moved to Khajuri Kalan in 2005 at the age of eight due to her special needs, as the little girl suffered from speech impairment. Brought up by SOS Mother Sarika, she joined the Special Olympics Sports Programme in 2014. Smart and energetic, Kiran was initially assessed for Basketball but later was found to be more competent and agile in Floor Hockey.

Today, Kiran is a talented 20 year old girl, who reminds us to believe in ourselves more than anyone else. Strong-willed and passionate to succeed in life, she is an inspiration to all us!

Vijay was moved from SOS Children’s Village Rajpura to SOS Children’s Village Khajuri Kalan in 2004 due to being mildly mentally challenged. In the year 2015, he got selected to represent the Indian Football Team at the Special Olympic World Summer Games 2015, held at Los Angeles. Witnessing his immense potential, he was also sent to Nepal by Special Olympic Bharat to participate in the FIFA Football Competition; his team made us proud by winning a gold medal.

Additionally in 2016 and 2017, he represented Madhya Pradesh as the Team Captain for the Cerebral Palsy 7-A Side National Championship, in which his team won the silver medal.

Today, 23 year old Vijay is working in Hotel Vishwas as part of the housekeeping department. With strong determination to win over all odds, he is a role model for many more young boys!

Children from SOS Children’s Village Jaipur were felicitated by the Ministry of Social Justice and Empowerment, Rajasthan, on the event of Cultural Night on 14th August 2018; this was organized by Government of Rajasthan.

The following children were recognized for their outstanding performance in class 10th and 12th Board Examinations and extra-curricular activities: