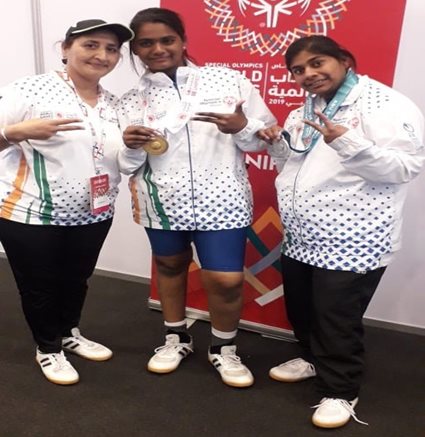 Manimeghlai and Shruti from SOS India have won Gold and silver medals, respectively, in cycling at Special Olympics World Summer Games in Abu Dhabi. The girls represented India in the 500 meters cycling championship.

This win is a motivation for all the specially abled children; their win justifies the quote by Desmond Tutu, “Hope is being able to see that there is light despite all of the darkness”.

16-year-old Manimeghlai was brought to SOS Children’s Village Nagapattinam when she was barely three years old. She is now growing up with her family under special care at SOS Children’s Village Khajuri Kalan. While Mani is mildly intellectually challenged, she has always been athletic, with a keen interest in outdoor games, especially cycling, running and floorball. She has been winning medals at state and national level.

Similarly, 19-year-old Shruti was brought to SOS Children’s Village Khajuri Kalan in 2007 when she was barely eight years old. Shruti is hearing and speech impaired. Her inability never deterred her from her dreaming big. She has been cycling for six hours daily since she was nine years old.

Anuja Bansal, Secretary General, SOS Children’s Villages of India, said, “Our two special daughters have made the nation proud; their achievement showcases the passion they carry irrespective of their inabilities. They are a true inspiration to many to dream big and create monumental victories.”

The two girls represent and exemplify SOS India’s journey of nurturing once abandoned children and empowering them with familial support towards the realisation of their potential.

While talking about such international platforms and their benefits in the making of an inclusive world, Ms Bansal said, “The Special Olympics is a calling for society to show their support for a more inclusive and unified world, which cares for these special children. We, at SOS India, provide full support to the parentless children with an inclusive ecosystem in a family-like environment in our villages, towards the realisation of their true potential.”