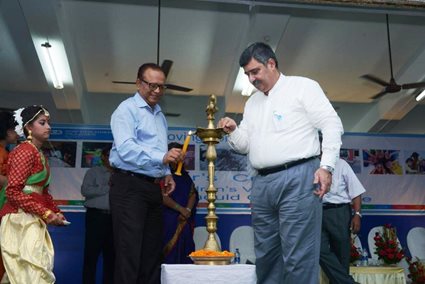 The auspicious occasion of the 40th anniversary of SOS Village Kolkata was commemorated with zeal and vigour.“The more you praise and celebrate your life, the more there is in life to celebrate” – Oprah Winfrey

SOS Children’s Village Kolkata celebrated the joyous occasion of completing 40 years of transforming the lives of many parentless and abandoned children. In its eventful journey of 40 glorious years, it has amply exhibited sincerity and integrity while working for the cause.

As part of the celebration, retired mothers were felicitated by the dignitaries where they also shared their journey as SOS Mothers. Additionally, the mothers were also
appreciated and congratulated for nurturing many children under their care, selflessly. Children, too, put up a great cultural show to make the day special.
A souvenir was also released on this occasion which captured the journey of 40 years of Kolkata Village. The Souvenir has summarized and covered certain significant case studies, images and success stories from its long journey.

Mr. S. Sandilya, President, SOS India addressed the audience and said,
“We are proud of SOS Children’s Village Kolkata completing 40 years of service, as it has embraced the challenge of transforming the lives of parentless and abandoned children. The village has not only made them responsible citizens, but also contributed to their personal and professional well-being. We wish that all such children who have lost parental care could receive a similar caring and protective environment, which focuses on their holistic development. In the coming years, we would also like to partner with Govt. of West Bengal in building the capacity of caregivers in Government Run Homes and training them in order to ensure qualitative care and needs of the children are met.”

This was followed by the speech of Mr. Sujoy Chanda, Guest of Honor. He added, “We congratulate SOS Children’s Village Kolkata for completing 40 years. Helping the children in crisis is a philanthropic task of high degree. It is a supreme service to humanity. Our department stands committed to the overall development of children who have lost their parents.”

On the auspicious occasion, Mr. Siddhartha Kaul also shared a few words with everyone. He said,
“40 years is a long journey and I’m very happy to come back to Kolkata. Around the world we have seen over 200 million children, roughly, who require help. While some of them don’t have parents, others are facing some kind of a challenge and India has huge population of such children. We, at SOS Children’s Villages, in the last 70 years, have tried to show a different way to such children. We strongly believe that every child has the right to live a decent life so that they can become independent, responsible citizens of the country.”