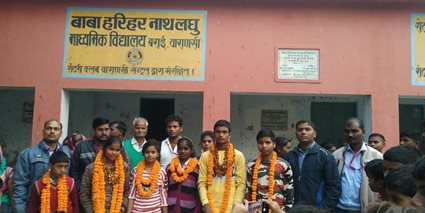 Home to more than 19 percent of the world’s children, more than one third of India’s population i.e. around 440 million is below 18 years of age. It is assessed that around 170 million or 40% of India’s children are vulnerable*. Due to this they have a limited role in in choosing the leaders who play an active role when it comes to various schemes and flagship programs for there over all development as future citizen of India.

In order to inculcate the importance of electoral process it is very important to make them understand during the tender ages why it is important to cast their vote as they reach 18 years of age and how these votes play an important for each citizen of the nation.

Keeping this in mind SOS Children’s Village Varanasi team along with UNICEF and other stake holders like Police/Child Line/CWC/ Beti Padho Beti Bacho district team etc. had a series of discussion to engage with children on these aspects with a futuristic approach.

A decision was taken to introduce Children’s Parliament also known as Bal Sansad in all the eight blocks of Varanasi. The Children’s Parliament is a group of children of a particular village, neighbourhood, or region who come together as a group for activities, learning, and to represent their interests and opinions to the decision makers of the village. This ensures that children, who remain at the core of all our projects, get a say in matters that affect them directly.

SOS Children’s Villages of India played a key role in implementing the same in one of the blocks (Chicagoan block in Varanasi). As the ground team was in touch with District Commissioner (Mr. Deepak Agarwal) it was decided to conduct this activity in the same exact manner where people cast votes to representatives of different parties and each representative holds a position or a portfolio working on the manifesto. It was decided that the election will be conducted in Baran villages were SOS India is already working.

The entire process followed as per the Panchayat elections. In total 24 candidates stood for election against 6 posts/portfolios. Ground team had regular meeting with Bal Panchayat and its members and a proper manifesto for developed for each of the members who were standing for election. As per process proper nomination were filed in dated on 28th of November and election was scheduled on 9th of December. Since this was first of its initiative happening on ground both children as well as parents were enthusiastic to see the vibrant children who were doing their campaigns door to door and requesting for votes to other kids who will be casting their votes on 9th Dec. Children were oriented and children were ready with their speeches as well as they were made aware on development issues related to school, health, Anganwadi etc. as well as issues which children face in respective villages were in they dwell.

Children who were eligible to contest for election were between the age group 14 to 18 years and children eligible to cast their votes were in the age group 11 to 18 years. In total 300 children were expected to cast their votes in this age group but 287 children turned out on that day for casting votes. Proper ballot box was prepared and police team were stationed as part of process during the election. The entire scene was like an actual election happening on ground.

Stake holders like block officer in charge as well as police and UNICEF team along with SOS team were part of the same to facilitate the process. And for voting children were requested to bring in there Aadhar cards or else voter ID cards as id proofs so that they will be allowed to cast their votes. The counting was done on the same date. Post counting 6 children were selected as leaders and the results were announced. Children who participated in this process were feeling so happy to see their representatives elected for whom they had casted votes. Proper procession was taken post announcement of results.

This was one of the initiatives undertaken at Varanasi which has not only build the capacity of children but made them aware on the following facts:

2.            What all things need to be kept in mind while selecting a leader from community mass as there representative and a series of discussion were done among the Bal group on each of the leader the issues for which they stood for.

3.            Importance of documents like Aadhar card and voter card. And how each vote plays an important in selecting their representatives

Moving ahead it is planned that these representatives will slowly participate in Gram Sabha too and will place the issues which they face in respective villages to the larger audience so that the adult population do take their issues seriously. Since the gamut of issues range from library inside school to drinking water, roads, health and sanitation and even Anganwadi centers. It is believed that this process will help children to place their issues within the community and making their presence felt as equal citizens of the nation.

*According to the report of the working group on child rights for the 12th Five Year Plan.