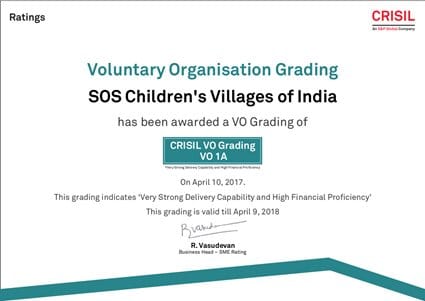 The CRISIL Grading represents ‘Very Strong Delivery Capability and High Financial Proficiency’ of a Voluntary Organisation.According to the State of the World’s Children Report, 2015 by UNICEF, nearly 140 million children worldwide are parentless of whom; 13.8 million have lost one or both parents. In India, more than 20 million children live in complete isolation, let alone have a family. Taking on the responsibility of ensuring healthy survival of these children and integrating them in to mainstream society is a huge task.  There are 3.3 million NGOs working in India to address a variety of socio-economic issues in the country including those working in the child care space.
While there are several NGOs rendering service in this sector, SOS India stands apart as one of the largest self-implementing NGOs in the country, operating for over 52 years. For any voluntary organization, it is necessary to build trust, be transparent and instill faith in its potential and existing donors, both individual and Corporate. Investing in a social cause brings with it the risk of misuse and fraud. To provide our partners the security and satisfaction, accreditations and ratings from reputed brands helps us to a great extent.

In April 2017, SOS Children’s Villages of India was awarded the highest VO grading of VO 1A by CRISIL for the year 2017-18. The rating as of last year for SOS India was VO 2A which has now been upgraded to the highest level. This distinguishes SOS Children’s Villages of India as the first international NGO to obtain such a rating for its work in relation to other non-profit organizations. Given the context of operating in the development sector in India and fundraising here, this rating stands as a stamp of approval on our credibility and delivery capability with respect to the stated objectives.

This grading symbolizes ‘Very Strong Delivery Capability and High Financial Proficiency’ of a Voluntary Organisation (VO) in comparison to other VOs. This certification is valid for one year from the date of assignment by CRISIL. It is an independent opinion of CRISIL and is evaluated on the VO’s relative capability to achieve its mandated objectives. The evaluation process of CRISIL is stringent, spanning due diligence process of various functions, extensive field visits etc. With such a ating, SOS Children’s Villages of India not only reinforces its reliability and integrity but also shines as a beacon of excellence in the development sector.
CRISIL Ratings is the dominant rating agency in India and this is majority owned by S&P Global Inc., a leading provider of transparent and independent ratings, benchmarks, analytics and data to the capital and commodity markets worldwide. The concept of Credit Rating was pioneered by CRISIL in India in 1987. It is the sole body that sets standards in all respects of the credit rating business and the same is used as a benchmark for the purpose of trading and pricing of debt instruments. Since SOS India’s target companies range from small companies to some of the largest business entities, CRISIL’s rating helps investors and donors to support their internal evaluation process.
On this occasion, Ms. Anuja Bansal, Secretary General, SOS Children’s Villages of India said “Congratulations to all the employees for making this highest CRISIL rating possible! Every employee has contributed in making SOS Children’s Villages of India a credible and transparent organisation with high delivery capability. Being a self-implementing NGO, SOS India has always taken great care in making all its processes transparent. It has also taken great care in sustaining its man power since without their unstinted support, it would not have been possible for the organization to carry out its mandate of nurturing the once parentless and abandoned children in the last fifty years.”
SOS Children’s Villages of India is the only voluntary organization in India to have been working towards providing a loving home to once parentless and abandoned children and empowering children at risk of getting abandoned from the community around our Chioldren’s Villages. The mandate of the organization to empower such children and improve their socio-economic status makes SOS India stand apart from others.