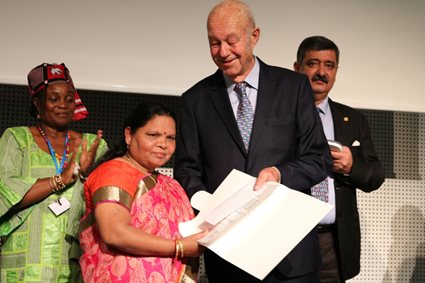 It is because of mothers like Geeta that makes SOS India distinctive from others. Their committed service in improving lives of many children is commendable. We salute Geeta and all other SOS Mothers for their noble efforts in the lives of many once abandoned and parentless children.

About the Award
Extra-ordinary performances are assessed on the basis of the impact created in the lives of programme participants. Only employees of SOS Children’s Villages are eligible for nomination for this award and all co-workers are invited to actively take part in the online voting process.

About Mother Geeta
Geeta Singh, aged 44, is a very committed mother, who does not believe in giving up. She has been serving in Children‘s Village Khajuri Kalan, a village designed and dedicated to children with disabilities and special needs. She had joined the organization in 2003. She has been selflessly taking care of these children for the last 14 years. Till now, she has raised a total of 12 children under her care and her journey still continues.

A documentary of Mother Geeta narrating her journey in her own words was shot by SOS India.