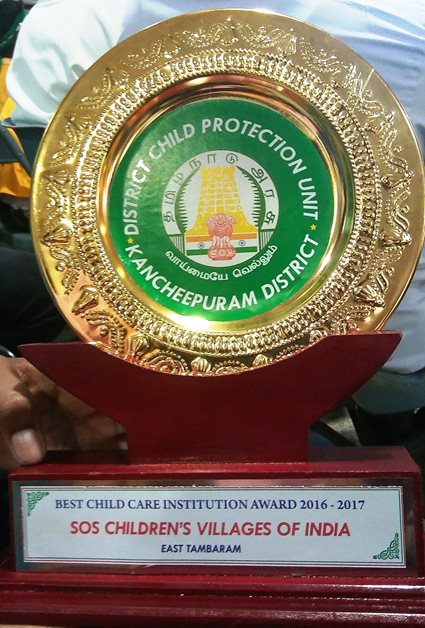 The award was given in the presence of the District Collector and District Child Protection Officer among the many other juvenile functionaries. The award was given as part of the Children’s Day celebrations in Tamil Nadu that took place from November 14, 2017 to November 19, 2017. On the same occasion, children who performed extraordinarily in academics and extra-curricular activities were also honored. As part of this, Gunalarajan, an 18 year old boy from SOS Village Chennai was also awarded a trophy for the same. In class X Public Examination, he scored a total of 479 marks out of 500. Presently, he is in class XI in Zion Matriculation School, Chennai. The boy aspires to become a doctor.

This award was presented by the District Child Protection Unit, Kancheepuram, Department of Social defence, Government of Tamil Nadu. The award ceremony witnessed a large number of representatives from various NGOs; additionally, there were also a few celebrities including Mr. S V Sekar, a renowned Tamil film actor, as part of the event.