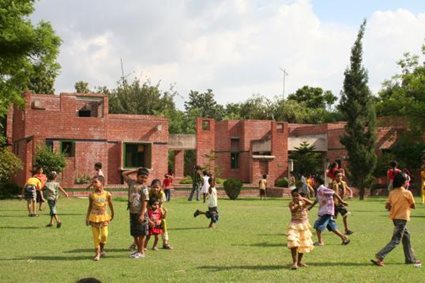 Rajpura, located in the state of Punjab, is an emerging industrial town with a growing number of small scale industries. An hour away from the city of Chandigarh, Rajpura is gradually growing with a number of industries and manufacturing units.

However, the people of Punjab primarily rely on agriculture and about two third of the population still reside in rural areas. The state sees many migrants from different Indian states because of its economic growth, but it results in informal settlements and substandard living conditions. People living in slums do not have proper access to sanitation and health facilities and are unable to provide for their children’s education. Many children either do not go to school or drop out at an early age. Parents are also often unable to meet the basic material and emotional needs of their children.

The socio economic conditions in Rajpura are making children more vulnerable and in need of care and protection. In Punjab, the situation has also deteriorated because of the drug menace. Drug abuse has led adults to become unable to provide for their families, financially and emotionally, which affects children adversely.

SOS Children’s Village Rajpura became operational in 1996. Presently, the total number of children of different age groups living under our care in Rajpura is 123 in 14 family homes. All children at SOS Village Rajpura are enrolled in formal schools and attend colleges and other professional institutes for their higher education.

What we provide to our children in Rajpura Village is a congenial environment where children grow up feeling loved, valued and nurtured to their full potential. All festivals of national and international importance are celebrated with great enthusiasm in the village. Various activities and workshops are also regularly organized to inculcate family values and bonds amongst the children.

Over 60 youths are living and learning at our facility for the youth in SOS Village Rajpura. To encourage them to perform at the best of their capabilities, regular activities and events are conducted. Workshops on important issues like sex education, career counseling and guidance etc. are organized that help in their holistic development. Boys in our youth house are free to visit their families and SOS Mothers at regular intervals including festivals and other significant days. We make continuous efforts to strengthen their emotional bond with their SOS Family and develop their personality.

While the majority of our young boys are pursuing their education, many have started working and are now aiming towards their settlement and social integration.

The Family Strengthening Programme in Rajpura has a total of 222 beneficiaries under its care. SOS India provides educational, health and nutritional support to them. Programmes, seminars and workshops are frequently organized to spread awareness on issues like health, hygiene, education etc. Additionally, SOS India also provides vocational training support to children.

Apart from these, SOS Rajpura works towards capacity building of the families under FSP in order to help them become self-sustainable. After FSP interventions in the community, there has been a visible improvement. Caregivers are now engaged in different kinds of income generating activities like stitching, tailoring, animal husbandry, agriculture, goat rearing, petty and cosmetic shops, rickshaw pulling etc.
Monthly activities relating to sports, G.K competition, debate competition, hand writing competition among many others are also being organized for children’s all round development.

We help our beneficiaries to reap the benefits of Government Schemes available in the State.