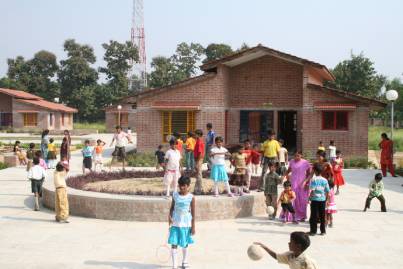 Situated on the northern banks of River Ganga, Begu Sarai is one of the many states in Bihar. Bihar is a state, where a massive proportion of people live Below Poverty Line (BPL). Due to the inability of people in Bihar to even cater to their basic needs, health of people is compromised often with poor sanitation facilities. Children here do not get the adequate care and nutrition they require for proper growth, and are seen drifting towards malnutrition.

Since the town is situated on the banks of Ganga, it also gets the added advantage of the fertile land it stands still on, where crops like sugarcane and rice can be cultivated. However, these areas are also greatly prone to floods and drought throughout the year. Employment in Bihar is also one of the unfixed areas due to which, a lot of women and children are forced to leave their villages and move to neighbouring towns in search of livelihood.

SOS Village Begusarai was established in the year 2003. The Village is located in the centre of the city, which is a well commercialized area. The Children’s Village at present consists of 123 children, who are nurtured under the loving care of 14 mothers, four mother trainees and four aunts. In 2016, a Kinship Programme was introduced by SOS India in Begu Sarai, where at present; we support three children through their relatives.

Importance of all National and International festivals is imparted in children at the Village, and each occasion is celebrated with utmost zeal by all mothers, children and co-workers of SOS India. Various workshops and training sessions are also held and organized in our village, where children along with the co-workers are educated about important social issues like child sexual abuse, female foeticide, youth development and its importance, gender inequality etc.

The role of a Youth House is to shelter young boys from the age of 14. At present, the total number of youth at our facility adds up to 77, where they live under the guidance and care of our SOS India co-workers. Children at SOS India go to regular schools, and many of our boys have shown remarkable performance in their class 10th and 12th examinations. Literary programs such as inter youth house speech competition, extempore speech, and essay competition are also held at the Youth House, giving a platform to children to showcase their talent.
Our children also participated and contributed towards the Swachh Bharat Abhiyaan, where our youth was seen cleaning at the ghats of Begu Sarai before the Chatt Festival.

The Family Strengthening Programme (FSP) was introduced to provide aid to families who are unable to sustain on their own. At present, the programme in Begu Sarai is supporting 1383 beneficiaries under its care. Through this scheme, we help families become self-reliant by working towards their socio- economic development. We have supported over 300 families with various income generating activities till now. Another way by which we help families is through Self Help Groups, which also ends up forming everlasting bonds of trust and friendship amongst people.
Awareness programmes on issues like hygiene, HIV/AIDs, health and reproductive sex health are also scheduled for people at regular intervals. In order to facilitate the availability of safe drinking water to the community, 13 hand pumps were introduced for the use of people. People were also made aware about the importance of Kitchen Gardening and training for the same was given. Regular immunization of all children below 5 years is ensured and records for the same are maintained.
In 2016 when Bihar faced a flood induced crisis, a relief operation was set up by SOS India to help people recover from their loss. 4200 families were supported and provided with relief material.