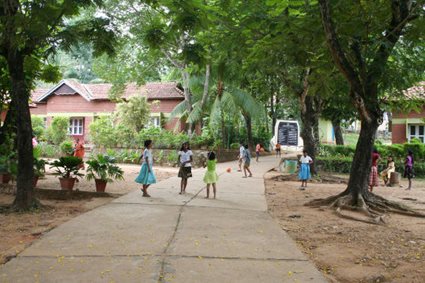 Thrissur, also known as Trichur is one of the largest cities of Southern India and is a part of Kerala. It is a hub for economic, educational and cultural activities, where tourism, too plays a vital role in being a source of employment and income generation for many. Even though the city if progressing, a large portion of people still continue to depend on agriculture and fishing to earn a living.

Thrissur, over the years, has witnessed a rise in the number of people living under urban poverty. Despite of attempts to improve the living standards in the city over the years, people living in slums in unsound living conditions have increased in Thrissur. The most affected groups of this condition are women and children, who are seen to be most prone to malnutrition and illnesses such as diarrhea.

The SOS Children’s Village in Thrissur started its activities in the year 1983. At present, there are over 170 children in 17 family homes, who are living under the care of 11 SOS Mothers, two SOS Aunts and six Mother Trainees.

Our aim through the Family Based Care Programme is to ensure that no child grows up alone and has a loving family to call its own. When children are welcomed in the village, all necessary measures are taken to help them adjust well to their new environment and family members.

At present, the number of youth in our village is 115. All our youth are constantly motivated to perform well not only in academics, but also co- curricular activities. They are also made part of day to day household activities and are involved in common chores like cooking, cleaning, washing etc.

At SOS India, all mothers are free to visit their children in the youth house whenever they wish to and so are the youth. All festivals of national and international importance are celebrated in the village with fervor. On such merry makings, youth, mothers, children and all village co-workers gather together to celebrate; this helps to secure and protect the bond between all mothers and their boys in the youth house.
While many of our children are still studying in schools, the rest are enrolled in colleges and are pursuing their bachelor degree courses. In addition, academic records and results of children and youth in SOS CV Thrissur have always been consistently well.

The Family Strengthening Programme in Thrissur was initiated with the aim of providing vulnerable families the support required for their survival. Our work through this programme is to strengthen such families by working towards their capacity building in order to help them reach self-reliance.

At present, the Family Strengthening Programme in Thrissur renders support to 449 beneficiaries under its care. People coming from these families were exposed to the concept of Self-Help Groups and were educated about the importance of the same. A self- help group is a committee of people who come together in order to solve common problems through mutual help.

Various training workshops are also organized by SOS India for these families in order to help them develop a skill set that would help them earn a living; activities like cattle rearing, goat rearing and many more like these are emphasized for the same.