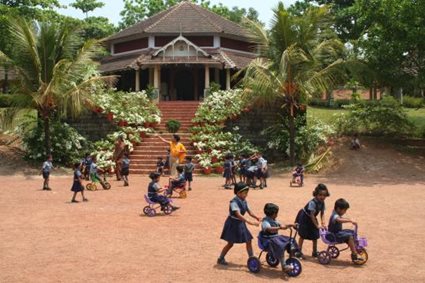 Aluva is a suburb of Cochin in the province of Kerala. Cochin is one of the fastest developing cities in India. Even though tourism has emerged as an importance source of employment and income over the last few years, agriculture continues to be the local source of income for many.

The increase in slums has been witnessed in the city along with an increase in population; this is because of the inadequate housing facilities in Cochin. In addition, the unemployment rate in town is also high.

People do not have access to even the basic amenities to support their family members on a daily basis. The most affected group by this condition is of children, since parents are often unable to cater to their emotional and physical needs; they are also prone to sickness and malnutrition.

The SOS Childrenās Village in Cochin was established in the year 1990. Presently, the village under its Family Based Care Programme nurtures over 150 children, who are looked by loving SOS Mothers and SOS Aunts. SOS CV Cochin completed its milestone of 25 years of service in the year 2016.

The village witnesses a variety of programmes that are organized for children, mothers and other co-workers. Festivals of both national and international importance are celebrated with great enthusiasm in the village, where everyone gathers together and enjoys merrymaking. To promote team spirit, excursions and picnics are also organized for children and their family members; this serves as a time for children to bond well with their family members.

At the age of 14, our youth boys are shifted to the Youth House where they are taken care of. At present, the total number of youth at our facility in Cochin goes over 82.
Various workshops on road safety, child labour, gender discrimination and other important social issues are organized for youth in order to keep them updated. During vacations, nature camps and activities like kitchen gardening are organized for boys to engage in group activities that help them build team spirit. In addition, as part of developing better behavior of youth, retreat programmes are also conducted at the youth house.

While some of our youth boys are still studying in school, others are enrolled in colleges pursuing higher education. Academic records of our children in Cochin have shown significant improvement over the years. The biggest achievement for SOS CV Cochin has been the placement of our boys abroad with attractive remuneration.

The Family Strengthening Programme in Cochin was implemented in the year 2003. The aim of FSP lies in enhancing lives of vulnerable families that are unable to survive on their own and require external.

At present, the FSP in Cochin supports 516 beneficiaries under its care. The concept of Self Help Groups was also introduced under our scheme, where common problems are solved by mutual help of people coming from the same socio-economic background.

Capacity building programmes are organized for all families enrolled in our FSP in order to help them develop the skill set to engage in income generating activities on a day to day basis. In addition, seminars on parenting methods, HIV/AIDS, gender sensitization, womenās rights etc. are also conducted for all FSP beneficiaries.

For any queries related to Hyderabad