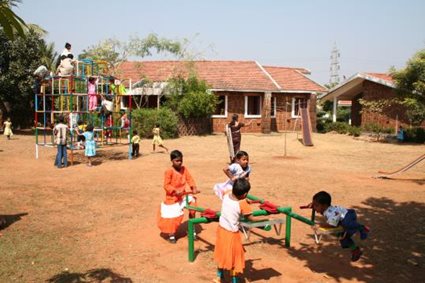 Chennai is one of the largest cultural and commercial centers in Tamil Nadu; it is also one of the largest cities in India. Growth and development in the city has seen a rapid growth over the years. An increase in the population of Chennai has also been witnessed in the city; this has led to a rise in poverty rate.

People migrate to cities in search of better livelihood. However, that purpose is not solved in Chennai and people end up living in slums with no or minimal access to basic amenities. Since sanitation and hygiene levels are poor in the area, children are more exposed to sickness and malnutrition.

Children, especially girls are forced to drop out of school at an early age and are expected to help earn extra income for their family. Human Trafficking is also prominent in the city; abandoned and parentless children are affected the most by this condition.

SOS Children’s Village is an NGO in Chennai which was established in the year 1979. At present, there are 114 children living in 13 family homes at our facility. Children at the village are placed under the loving care of SOS Mothers, who are assisted by SOS Aunts in their daily household chores.

The village consists of an on-site medical center, primary school, community center and temple to provide for the health, education, social and religious well-being of all community members. The structure of the village is environment friendly for all children and follows the traditional lifestyle to provide children with a sense of cultural integrity, social responsibility and belonging.

All significant festivals are celebrated at the SOS Village, where children, mothers and other co-workers of the village gather together to enjoy the festivity. This also serves as a good bonding time between children and their family members.

At the age of 14, our youth boys are shifted to the Youth House where they are taken care of.  At present, there are 60 youths under our care at our facility. While some of our youth are still studying, the rest attend college and are pursuing their bachelor’s and master’s degree.

Various awareness programmes on gender equality, child labour, health and hygiene, road safety etc. are organized for our boys throughout the year at regular intervals. Academic records of children in the youth house at Chennai have shown significant improvement over the years. Besides performing well in academics, the youth also actively takes part in extra-curricular activities.

(A) Hermann Gmeiner Nursery and Primary School
Hermann Gmeiner Nursery and Primary School in Chennai is situated inside the village campus. The school caters to children up to class V. On national festivals like Republic Day and Independence Day, children engage in a cultural programme held at the school level. Excursions and exposure visits are also organized for children in order to give them a break from their academic routine.

(B) Medical Center
SOS Medical Center in Chennai started functioning in the year 1984. This center provides service to children, mothers and other village co-workers. At present, over 1000 beneficiaries from the Family Strengthening Programme and community in the neighborhood are benefitted from this center.

Family Strengthening Programme in Chennai was initiated in the year 2009 with 75 families. The purpose of introducing an FSP in the city was to uplift vulnerable families out of the vicious web of poverty and helping them reach self-reliance. At present, the programme takes care of 275 beneficiaries under its care.

SOS India not only provides financial aid to support these families but works towards their capacity building in order to help them become self-sustainable.  A number of skill building activities on cattle rearing, goat rearing, tailoring and many more like these are conducted for all caregivers enrolled under the FSP in Chennai. In addition, health and nutrition camps are also organized to maintain health standards of all beneficiaries.