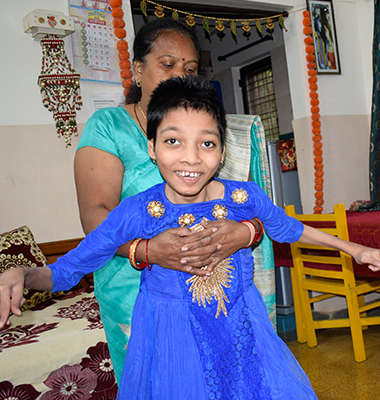 We enable specially-abled children without parental care to live a normal life, through a uniquely designed Children’s Village, at Khajuri Kalan, which is equipped with infrastructure for medical care and training. Children and youth with disabilities live and grow in a loving home that is watched over by trained mothers and support staff ensuring personalized care and training for each child. Imparting care, vocational skills, exposure to creative ﬁelds and sports help bring out the best in the children.

For I know I can 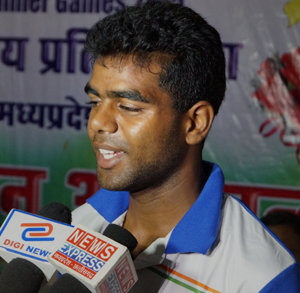 “Keep your face to the sunshine, and you will never see the shadow.” This quote finds deep resonance with the journey of Vijay, a young man, full of energy, and zest for life. Today, as he edges toward his mid-twenties, the fact that he is mentally challenged, and lost his parents years ago, don’t seem to have impacted what this lad set out to achieve in his life, and has achieved, thanks to sheer grit and determination. Brought up in SOS Children’s Villages of India Khajuri Kalan, since 2004, he reminisces about his early days at the CV: "When I was identified as a special child, and brought to SOS CV Khajuri Kalan, I didn’t like it at there at first; it took me time to settle in, as I could not adapt that easily; earlier, I was at CV Rajpura; but as they say, love overcomes everything, and the love I received, from my Mother and siblings, made the entire journey an experience to cherish.”

Vijay’s schooling was a regular one till the age of ten. However, recalling subject matter was a challenge, and his overall comprehension was weak. Besides this, slurred speech was another hurdle for him; all these factors made it difficult for him to make friends easily. With the consistent support from teachers, parents and SOS siblings, Vijay, instead of withdrawing himself into a shell, made conscientious efforts towards becoming more outgoing, by working on his confidence and self-esteem. Sometime later, Vijay was enrolled in special education.

Says the young man: “I joined the job development course at Digdarshika Institute in the year 2013. The course helped me develop skills in packing of goods and rudimentary office management skills; besides, I now know basic cooking, and even craftwork.” Care of the self; travelling in public transport; maintaining a diary for monetary transactions, addresses, and phone numbers of friends, are some of the life skills Vijay has been able to acquire and polish over the passage of time, amongst other such.

Post his course, Vijay was employed at a three-star hotel in Bhopal, as part of the Housekeeping Department. Seeing his consistent performance, he was upgraded to the Bakery Department of the same hotel. At present, he works as a trainee at the reception of another hotel in the same city. Excitedly he explains: “My job here includes a number of things like filing, attending to customers, taking messages and orders. I even help the manager in keeping the accounts.”

Another field Vijay excels in is football. He has won many prizes, especially in football championships organized at the state and national level. Seeing his talent, he was also offered professional coaching by SOS Children’s Villages of India. In 2013, he participated in a football game for specially abled children organized at Hissar, Haryana, where he was awarded The Best Player of the Madhya Pradhesh team! In fact, his team won the bronze thanks to his performance. Seeing his consistent and brilliant performance, the Special Olympics Selection Committee selected him for the World Summer Games 2015, held at Los-Angeles USA, where he represented the team as a Forward. Though the team stood fifth, Vijay and his team’s performance received recognition and accolades. He, subsequently, also represented the Special Olympic Bharat Football Team in the FIFA Football Tournament held in Nepal, in the year 2017, as team captain, for which his team won the gold.

As they say: “When the going gets tough, the tough get going.” This couldn’t hold more true than it does for Vijay’s journey. He truly lives up to his name: Victory in the Hindi language. Kudos, young man! And, way to go!