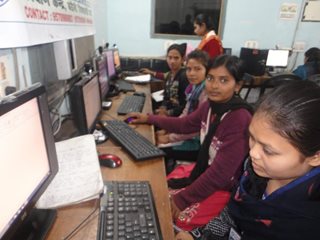 A programme to impart employment oriented computer training to disadvantaged girls from our Family Strengthening Programme was launched by SOS India in 2016 in all its locations. The initiative was introduced in all the 22 states, where the project was kick started with an identification of the target group. Bright and talented girls between the age group of 16-20 years could be enrolled in the programme; these girls were either from the most disadvantaged families or were school drop-outs who could not continue with their education after class 10 due to lack of funds. Special preference was given to children who were on the verge of losing parental care from their biological families.

Selection of the desired candidates was done from a group of 300 girls. All SOS India Villages were instructed to follow a three step selection process, where potential girls were screened and eventually selected. The process was time consuming but the end result was satisfactory and had well deserving girls who fit exactly into our criteria. A total of 122 girls were selected and enrolled for the course. The initial target of employment after the completion of the training course was 30%, but it was later raised to 90%, which was a jump of 300% increase in the qualitative outcome of our programme.

Prior to the commencement of the programme, various awareness programmes and counselling sessions were organized for both, the prospective candidates and their families. The purpose of these sessions was to educate them about the benefits of computer education and how it would help their girls to build a dignified place for themselves in this highly competitive world. Girls, accompanied by her parents were also taken to formal institutions to have a one-on-one discussion about the future prospects of this training course. Once the guardians of the selected candidates were fully satisfied and ready to enroll their girls, action towards their final admission was taken. The admission process was followed by identification of the best training institutions in all our target locations. Our aim was to find out training centres that were recognized by government and had a positive placement record in the past. Institutes which had a higher employment rate after completion of the course were preferred. Once the desired centre was on board, an orientation programme was organized by SOS India in order to make our needs and objectives clear to all trainers and professionals; only with better understanding of our initiative could the contribution by the institute be received to the maximum.

Till January 2017, 54 girls were admitted across 15 locations of SOS India and are in different stages of their training. In addition, fresh applications of 68 girls were approved by the National Office of SOS India; they were admitted in February 2017. All the candidates were enrolled in a one year full time professional diploma/advanced diploma and other job-oriented computer education programmes. Training given by these institutes also has an in-built component of soft-skill development and personality development including English communication skills.
It has not been very long since we started with this porgramme, but seeing the massive awareness it is raising amongst people, we know that we are on the right path. To see the large number of applications pouring in in the last few months, we are motivated to expand, grow and empower as many young girls as we can in future. At present, another 150+ new applications have been received by the SOS Children’s Villages across the country, which are at the preliminary stage of the screening process. Out of these applicants, a total of 128 best-of-the-lots will be enrolled after completion of the due process of screening, selection, orientation & approvals by the end of March 2017.

1. Vijayabharathi, Nagapattinam: “I am happily attending this computer training course.  The classes are very useful and informative. My confidence level has gone up many-folds. I am sure it will be useful to get me a job and make my life better.”

2. Jyoti, Alibug, Maharastra: “I cannot believe that all these are happening for real. A few months back I thought my education is over and the time has come for me to engage in household activities. But it is not over yet, it’s just the beginning…”

3. Neha Kumari, Begusarai, Bihar: “I go to the town of Begusarai daily from my village along with four of my friends in the afternoon to attend computer training course. It feels good when five of us ride our bicycles together… A lot of people on the road often ask us where we are going in the afternoon and it is fun to see their reactions after we reply.”

4. Senthamarai Selvi Nagapattinam: “I am happy because I got this opportunity of pursuing training in a reputed institute like NIIT. I like the class rooms, the computer lab, my instructors, my friends…everything & everyone here. I am enjoying & preparing for my future at the same time.”