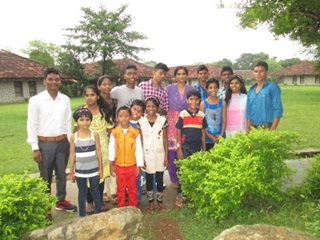 Mitheleshwari was born in a village of Chhattisgarh. She was married soon after completing her studies and was gifted with a beautiful child. Her marriage could not survive for long and she was separated from her husband. While Mitheleshwari was trying to absorb her separation, her only child bid goodbye to the world. Mitheleshwari was devastated from the loss. She shifted back with her parents and began to search for motivation and a reason to live.

“It is in your moments of decision that your destiny is shaped.”
– Tony Robbins

Mitheleshwari did not know about SOS Children’s Villages of India before her father brought her the advertisement of a vacancy in the organisation. The advertisement made it clear that it was a child care organization working for the welfare of children and that they needed a ‘mother’ to provide a homely environment for them.

Her journey as a mother began in March 2006 with a training at the National Training Centre in Faridabad. During her training, she was sent to SOS Children’s Village in Jaipur for eight days to understand the ethos of SOS India. Soon after her training was complete, she was appointed as a mother in SOS Village Raipur and was given the responsibility to look after four children. All of these children belonged to areas that were affected by the Naxals; they could only speak their tribal language. It was an overwhelming moment for Mitheleshwari when the children called her ‘mummiji’ for the first time. By the time she adapted herself with the children and her surroundings, she was blessed with a ten day old baby girl and a nine year old child. She was very happy to have gotten the responsibility of these children. In 2008, her family was increased by five more children out of which, four were girls.

I joined as mother in March 2006 and attended NTC, Faridabad, for training. In May, I was sent for eight days of training and exposure to the SOS Children’s Village in Jaipur to understand the concept better. By October, I was appointed at the Raipur Village and was given the responsibility of four children. All the children belonged to areas affected by Naxals and could speak only their tribal language. My eyes were full of tears and heart full of happiness when they called me ‘Mummiji’ for the first time. Just after a week, I was blessed with a ten day old girl child. I felt blessed to have been given the responsibility of this small child. Today, she is a beautiful nine year old girl. A nine year old child also joined my family.  In 2008, we welcomed five more children out of which, four were girls.

By 2011, three more children joined her family out of which, one was a girl who was only two years old. The baby was malnourished and also had breathing problem. Another child who joined at that time was suffering from Tuberculosis and was at the third stage. It was a challenge for Mitheleshwari to look after these two children, but her faith and resolve to improve their health did not deter. Because of Mitheleshwari’s selfless love and care, the little boy recovered in six months even when the doctor had prescribed an eighteen month long course of medication for him. Great support was given to her by all co-workers of the village.

In 2012 and 2013, two more children were welcomed in her family- both naughty and sweet. Today, she is a mother to sixteen children and enjoys spending time with all of them. Her values that she imparted in her children are now reflected in the way her children have grown up. She is an epitome of kindness and considers all her children her life.