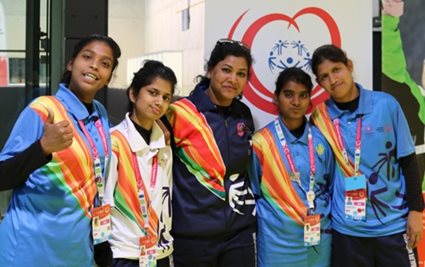 Three athletes from SOS India, Dolly, Shruti and Vijay had participated and made India proud by winning one Gold, one Silver and one Bronze medal in Cycling and Football at Special Olympics World Summer Games in Los Angeles in 2015.

This year, four girls from SOS Children’s Villages of India, Kiran, Vidushi, Diksha and Dulfisha participated at the Special Olympics World Winter Games 2017, Austria, and won a Bronze medal in Floor Hockey. While three of the girls were part of the India Floor Hockey team, Vidushi participated in Floor Ball and was adjudged as the best player for the same.

Battling all odds and winning games comes easy to these four champions, aged 17 to 19 years. These young parentless girls with varying degrees of disabilities did not let any obstacle dull their resolve to realize their dreams and bringing laurels to the nation. Sports have empowered them to try and make a name for themselves as well as for India. All thanks to their sheer talent, hard work and excellence in Floor Ball and Floor Hockey.

Role models for girls across the nation, all four of these gritty, special girls are from SOS Children’s Villages of Khajuri Kalan, Jaipur and Latur. They have never allowed their social circumstances or disabilities to come in the way of their hard work and determination to dream big. Their journey began in SOS India Villages when they were infants and toddlers. Each of these girls has their unique stories to tell the world.
The first and foremost need of these special children is to grow up in a normal surrounding, where they can learn and grow with others. At the same time, their special requirements need to be addressed too. Central to these is the development of a physical environment that is supportive, facilitating and encourages independence and freedom, while providing a secure surrounding. All of these needs along with a loving home were provided to them by the SOS India, thus letting them blossom. Our organization believes that all children irrespective of their abilities, whether differently-abled or specially-abled can make India proud.

In February 2016, the National Floor Ball Championship was organized at Bilaspur, Himachal Pradesh. Nearly 500 athletes with special needs (male & female) from 20 states participated in this National level Competition. The girls of the Floor Ball team of Madhya Pradesh comprised of eight players namely, Lakshmi, Kiran, Mahalakshmi, Shruti, Pawli, Mansi, Vidushi & Manimeghlai. All the eight players are from the SOS Children’s Village in Khajuri Kalan. The team reached the finals and won a gold medal for the state of Madhya Pradesh. Thanks to the hard earned first position; Vidushi and Kiran were shortlisted to represent India at the Special Olympics World Winter Games 2017 in Austria. They are children with special needs who have been able to win over their circumstances and emerge as a store house of sporting talents. They were joined by two other special girls Diksha from our Latur Village and Dulfisha from Jaipur Village in the same team.

“Our greatest weakness lies in giving up. The most certain way to succeed is always to try just one more time.”

Kiran was brought home to SOS Children’ Village Latur in November 1996 when she was only a day old. Later she was moved to Khajurikalan in 2005 when she was 8 years old, due to her special needs. She is being brought up by SOS Mother Sarika. Kiran joined the Special Olympics Sports program 3 years back. She can hear but cannot speak. Kiran was initially assessed for Basketball but later was found to be more competent and agile in Floor Hockey. “Her forward backward is very good”, says Ms. Pratibha Shrivastava, her Coach

Vidushi was brought home to SOS Children’s Village Varanasi when she was a 4 day old baby in August 1999. She was later moved to Khajurikalan in August, 2007 when at 8 years of age and was placed under the loving care of SOS Mother Reena Helen. She vocal hearing impaired was given the best possible treatment but unfortunately there was little improvement in her condition. She is not keen on academics but takes keen interest in sports such as Floor Hockey, Football Badminton, Basketball, Cycling etc., swimming being her favorite.

Dulfisha was seven years old when she came to SOS children’s village Jaipur after the death of both her parents. Upon home coming, the girl was entrusted to the loving care of SOS mother M.S. Gauri. A shy and hesitant girl, Dulfisha initially took time to adjust to her new surroundings but with loving care and support she gradually settled down. She was not able to walk freely as she had rickets in both legs. She was provided appropriate medical treatment and after the surgery, she could walk freely and started playing outdoor games with other children in the village with full gusto. She was so fond of playing games and sports and used to take part in school level competitions. Her sports coach spotted her talent and suggested that she should play floor hockey instead of basketball.

Diksha was brought home to SOS Children’ Village Latur in July 2001when she was only 3 years old along with her with her two biological siblings; elder brother Vishal & younger Sister Nikita. She is the daughter of a single parent. Her father died due to liver failure in May 2000. Her mother is a poor, illiterate, daily wage agriculture laborer, suffering from chronic illness. She was not able to take care of these three children and therefore, admitted her children to the nearest SOS Village. Diksha went to normal school till class VI but she was not able to cope up with studies. Seeing her poor performance, she was admitted in a special school in the year 2009 where she has shown keen interest in sports and dance. Since then there has been no looking back.