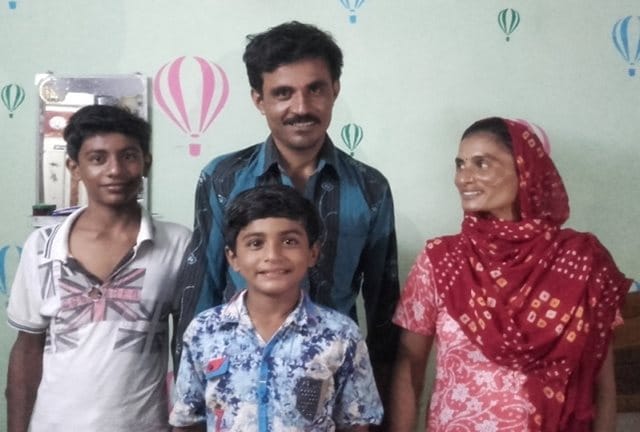 A family that was on the verge of falling apart now lives together, laughs together. Find out how SOS Children’s Villages of India helped Hansa’s family to battle all odds and write their own destiny.

Family Strengthening Programme (FSP) is a preventive community intervention programme, designed to prevent children from losing parental care and getting abandoned. It empowers children and women from poor and vulnerable cross sections like children of widows, single women or below poverty line families.

Hansa, a woman aged 35 years lives with her husband and two children Nitin and Dilip in an urban slum at the outskirts of Bhuj. The slum in which the family lives was enrolled in the Family Strengthening Programme of SOS India in October 2014; it is divided into four clusters: Talav Sheri, Mix Community, Harijan Vas and Baloch Cluster.

Hansa was part of the Harijan Vas Cluster. The living conditions of the family were poor with no kitchen and toilet facility. The house was divided in two parts out of which, one was used for cooking and the other for children to study. Her children attended the Government Primary School but were irregular due to lack of attention and motivation by their parents. Hansa’s husband Mahendra was skilled in weaving and designing shawls. Unfortunately, his addiction to alcohol led him to not only lose out on his career but also on his relationship with his family members. Due to this reckless behaviour of her husband, Hansa began to work as a daily wage labourer to fill up the gap in finances that increased with time. There were times when the family even had to sacrifice on their meals. In addition, Hansa’s children also developed hatred for their father seeing his irresponsible attitude towards everything in life.

Hansa’s family was enrolled in the Family Strengthening Programme in October 2014. Since then, she is part of a Self-Help Group that was formed to save amounts as little as INR 50 a month. When the FSP was informed about Mahendra’s condition, an anti-alcoholic treatment was started with no delay in consultation with Mr. Tushar, neurologist/anti-drug specialist; the results of the same were favourable. It has now been a year that Mahendra has not only been away from the consumption of alcohol but has also started to engage him in some income generating activity to support his family. His first step towards the same was dropping the idea of casual labour work and initiating self-employment; for this, he bought a second hand auto rikshaw through which he could generate INR 200 per day. Mahendra was financially assisted by the FSP, which helped him acquire a loan of INR 25,000 from the Self-Help Group as a Cash Credit Loan and INR 20,000 from the FSP itself. Due to Mahendra’s ill habits in the past, the SHG initially was not very keen on lending him money that he required. For this, Hansa and the FSP team then assured the group about Mahindra’s improvement and how he had quit alcohol completely; this was necessary to gain their confidence. Mahendra promised the group to repay with due diligence, which he did, and stood firm on the trust of his wife and the FSP team. Today, he not only is free of all debts but also pools in money for the monthly savings. Additionally, he also contributes money for Dilip’s tuition, who is now studying in class 10.

After the satisfactory settlement of Mahendra, FSP also played a vital role in empowering Hansa economically. To support her family, Hansa worked as a casual labourer. After the intervention of the FSP, she was provided linkage to work as a cook with the government Anganwadi. Unfortunately, she could not continue because of the lower wages. https://www.comedianjoshwolf.com/ Later, she was appointed as a housekeeper at the Hotel Grand 3D that paid her INR 4500 per month along with breakfast/lunch, annual uniform, festival allowance and bonus among the many other perks.

Today, the children who hated their father now share a warm and loving bond with him. Mahendra also gifted one of his children a bicycle for his school. With this overall improvement, Dilip’s performance in school has also enhanced. Hansa is now a happy woman to have her husband come back to his family.

“My joy and satisfaction to see my husband take up familial responsibilities is something beyond words”, she adds.

As for Mahendra, he says,
“I admit that I had lost my sense of responsibility due to my bad habits. But, now I can proudly say that I’m over all of them for which, I am thankful to my wife and the FSP team for their efforts to help me get back to the right track in life.”

In addition, he also declared his plan to return back to his job of weaving shawls. SOS India feels proud of Hansa and Mahendra to have overcome their challenges and wishes them all the luck for their future.